So I’ve briefed you on micro gaps, and have enjoyed numerous trips to Bath, Bristol and London – but have you ever given any thought to was lies in between? Or perhaps events in our history that even noted those towns and cities as popular and fashionable? Allow me to enlighten you.

If you don’t find the history of the Great West Way nearly as interesting as I do, click here to skip this section.

Until the mid-19th century, the only means of travel on the roads was by horse.

Sasha Trubetskoy has wildly reimagined every known Roman settlement in Britain on a subway-style map of Roman roads. Using Latin names, you‘d be forgiven for not recognising today’s major towns and cities, so here’s a few to help you out;

The lines themselves have modern English as the original Latin names have been lost to history. You can also see a version of the map with today’s English names here. 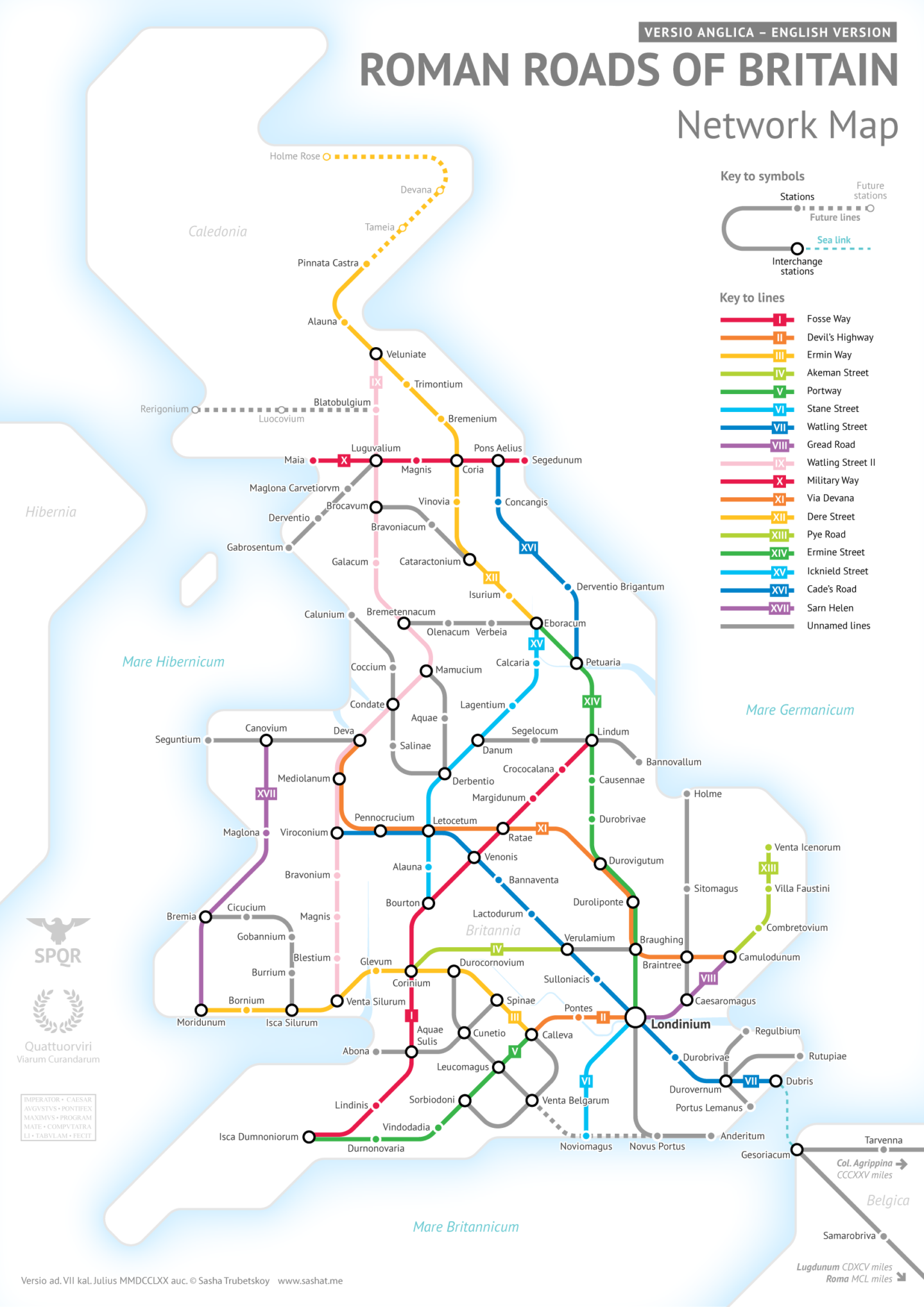 While we can attribute the physical routes to the Romans, there’s a number of notable monarchs that contributed to the roads that we know today.

This can first be traced back to the 16th century during the reign of Queen Elizabeth I (1558 – 1603) who enjoyed ‘progresses’ to her realm – including much of the West – road travel began to be used more widely for private as opposed to military purposes.

In 1574, Queen Elizabeth I started her progress from London with her sights set on Longleat. Historical accounts pinpoint her route passing from Greenwich, Richmond, Windsor, Reading, Ewelme, Woodstock, Sudeley Castle, Frocester (Berkeley Castle), Bristol and on to Bath.

Some 114 years later in 1688, Queen Anne visited seeking a cure for her gout – as a result of regular visits, the New Bath was renamed to the Queen’s Bath.

Endorsed by the Queen, Bath became incredibly popular among fashionable high society – earning the road to the town the nickname of ‘Bath Road’.

In 1635, King Charles I (Reigning 1625 – 1649) – proposed by Thomas Witherings – built “Six Great Roads” to speed the transport of the King’s messages from London to the ports. (This facilitated the creation of the Royal Mail in 1660)

The Great West Road was one of Withering’s six roads. The original “Great West Road” in 1635 ran from London to Bristol via Oxford, but in 1660 changed to run along the Thames valley through Hungerford.

It’s said that the journey from London to Bristol could take 2-3 days, with differing routes used during the various seasons.

Today this ancient route is referred to as the A4, and runs parallel to the M4.

In a bid encourage tourism to other parts of the UK, The Great West Way has introduced a new 125-mile touring route between Bristol and London that takes you off the beaten track through idyllic countryside, quaint villages and elegant market towns – the route is very similar to that of Queen Elizabeth I’s progression.

I had the opportunity to discover Windsor Castle, and the Great West Way has put together some handy suggested itineraries. 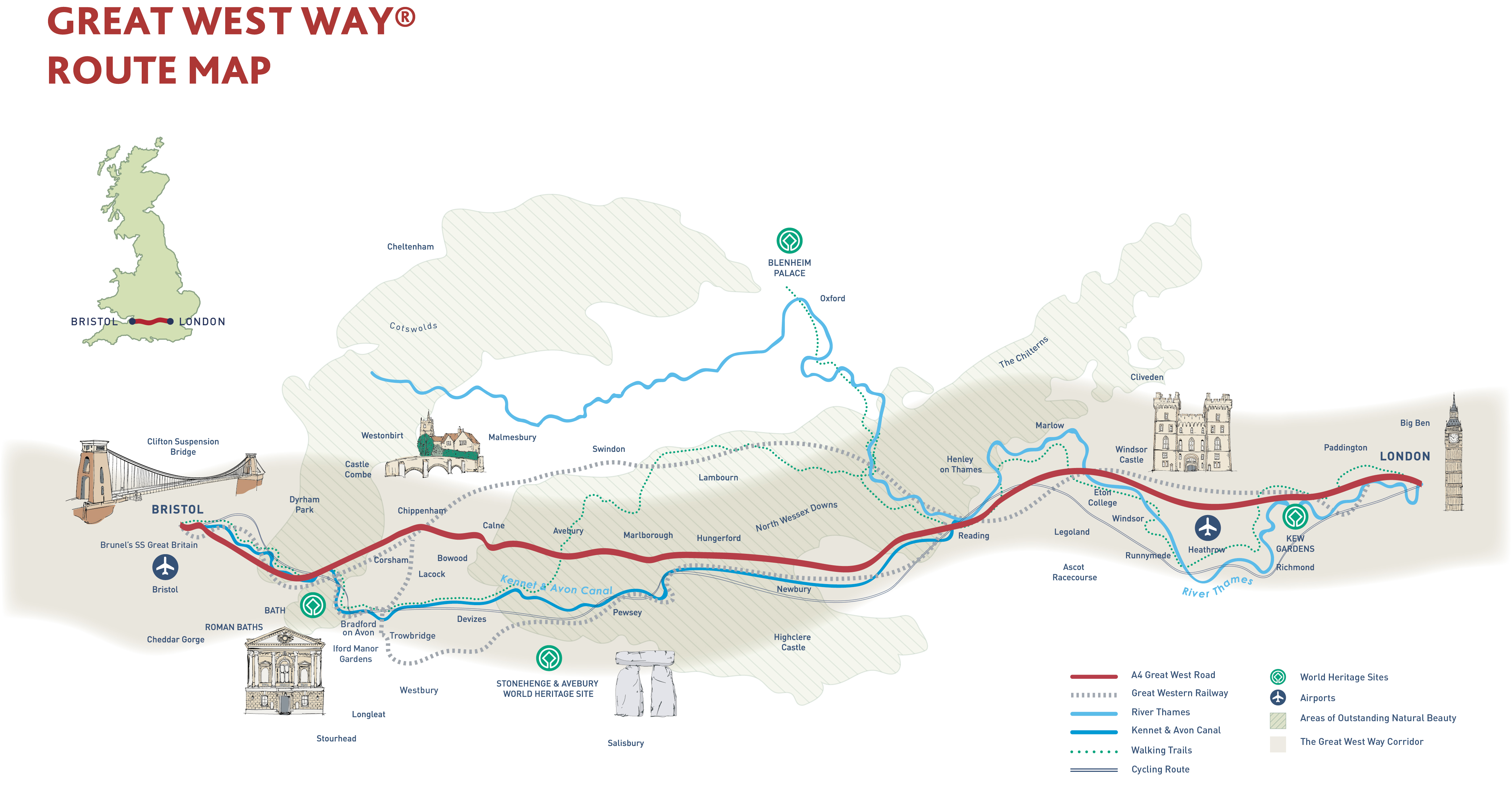 Conceived in 1832, The Great Western Railway contributes its own fascinating history and is a fantastically linked to the Great West Way – mostly because it’s entire purpose was to link Bristol and London through a pioneering railway line – and runs parallel to the A4 for a time.

There are three Great West Way Discoverer routes available – East (£69/£159), West (£24/£69) or Global (£239). This gives you the flexibility to explore the area in one-day instalments or over the duration of a week – either by train and/or bus, covering the following areas;

Do consider if this works out the most cost-effective way for you, as if you only have your sights set on one location it’s likely to be much cheaper to buy a return ticket to that destination.

An Introduction to the Great …

Where to Find Mickey Mouse …