Hear ye! Hear ye! You’re cordially invited to the Queen’s residence at Windsor Castle, to witness breathtaking views of the Windsor parkland, the Thames Valley and the London skyline.

Well, in fact, you don’t need a special invitation as Windsor Castle is open year-round, but visiting between August and September can afford you some exclusive 360-degree views of the estate – read on to find out how.

Disclaimer: I was invited by the Great West Way to enjoy a complimentary visit to Windsor Castle to highlight awareness of the tower tours, but no payment was exchanged for this article or any related posts. All opinions expressed are my own.

In a bid to encourage tourism to other parts of the UK, the Great West Way has developed an 125 mile touring route that follows in the horse steps of ancient routes travelling from Bristol to London, and everywhere in between.

Travelling from Bristol, it seemed by card or by train were the best options, as the coach would have involved changing in Central London.

By car, it’s an easy drive on the M4 from Bristol exiting at Junction 6 and a short drive into Windsor. There are a number of car parks available, the River Street Car Park just a few minutes after exiting the M4 and only 5 minutes’ walk to Windsor Castle. All-day parking for a Saturday was around £21.

As a daily commuter from Bristol to Gloucester, I’m always happy for any excuse to ditch the car. When considering the fuel consumption, parking costs and general effort of driving to and from Windsor, I opted for the train.

The train involved two changes – first at Reading and then at Slough – but both journeys went seamlessly even making the return journey in the same time it would have in the car – RESULT!

Top tip: If you’re planning to travel by train quite a lot throughout summer, consider the 26-30 Railcard and/or Great West Way Discoverer pass to access worthwhile savings on train fares.

The Royal Collections Trust have begun a £37-million investment at Windsor Castle (and other royal places) to improve the visitor experience. In the meantime, you can find the accessibility advice for Windsor Castle here.

What’s So Special about Windsor Castle?

The country has William the Conqueror to thank for Windsor Castle, who commissioned the strategically placed fortress in 1070 – built on high ground, and only one day’s march to London.

Even today Queen Elizabeth enjoys the close proximity to Ascot Racecourse, and short travelling distance to Buckingham Palace. But with around 7-8k visitors a day is it just another tourist trap?

The home of ten monarchs covering over 900 years of history and the final resting place of Henry VIII, Windsor Castle is much more than a wedding venue.

Not to mention it’s the Queen’s favourite residence, who spends most of her private weekends at Windsor Castle.

Top tip: there is always a flag flying at Windsor Castle, but it’s the Royal Standard flag signifies the Queen’s presence.

Read on to discover why it remains a popular haunt. 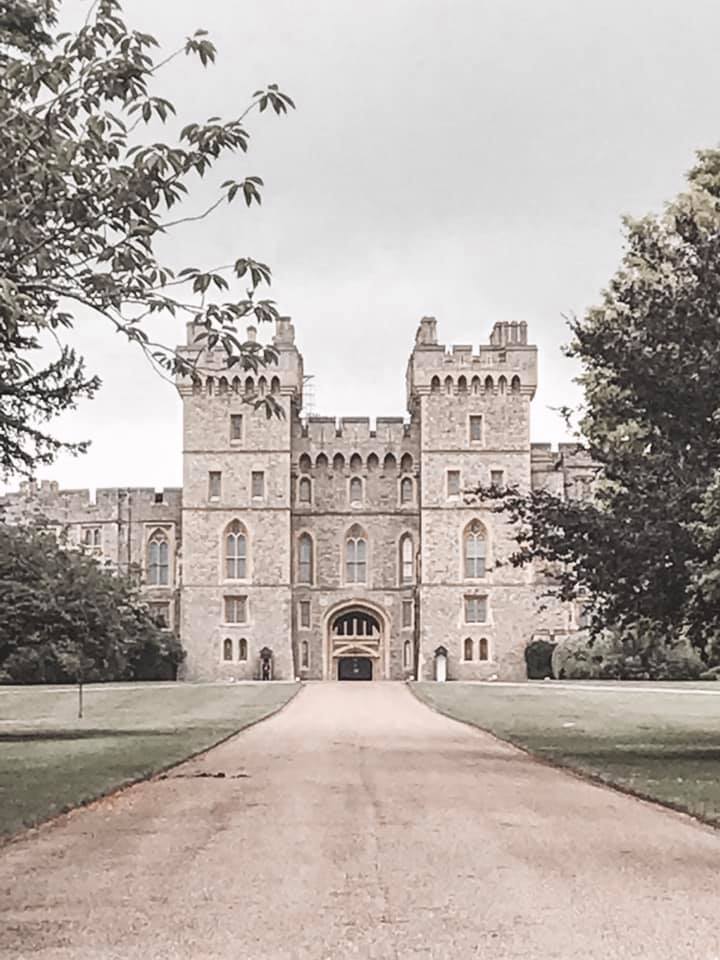 Do you remember that manicured lawn where President Trump and Queen Elizabeth soirée’d to a line of royal guards? And what about a behind-the-scenes glimpse of where Harry and Meghan greeted their wedding guests?

Well while the Royals away, the visitors will play!

As while the Queen enjoys her summer retreat in Scotland throughout August and September, the oldest surviving structure of the castle opens its doors to keen-eyed visitors.

The Conquer the Tower Tour climbs 200 steps to reach a height of 65.5 metres that affords 360 degree views of the castle’s 5.3 hectares and surrounding areas.

It also offers exclusive glimpses of the State Apartments, the location of the wedding of HRH Prince Harry and Ms Meghan Markle, the Long Walk, the Sovereign’s Entrance and the Queen’s own residences – as such, photography of this part of Windsor Castle is not permitted. 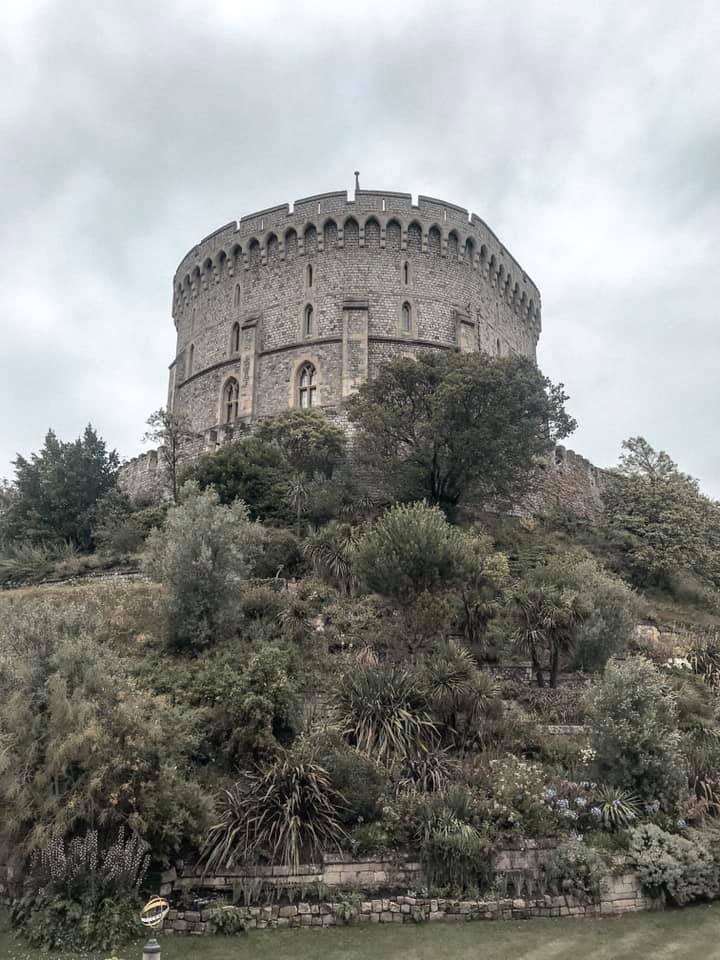 Changing of the Guard

The Changing of the Guard routinely takes place at 11am on Tuesdays, Thursdays and Saturdays and if you time it right, you could watch the spectacle from the vantage point of the tower! Check the British Army website for details.

Upon entering the Castle, you can join a free 30-minute tour of the outside areas of the Castle with a Wardens. They depart at regular intervals throughout the day from the Jubilee Bandstand, and finish at the entrance to the State Apartments.

There are two routes in which to discover the State Apartments – the Ceremonial Route and Historical Route.

The Ceremonial route guides visitors through many of the extravagant rooms that are used today by The Queen and members of the Royal Family, for such things as official visits by Heads of State from other countries, investitures, and awards ceremonies.

The historic route will show you the rooms that were built for Charles II and his Queen, Catherine of Braganza – and equally as fascinating.

Famed for being the televised location of HRH Prince Harry’s and Ms Meghan Markle’s royal wedding, the Chapel houses the tombs of ten monarchs, including Henry VIII and the Queen’s grandparents. 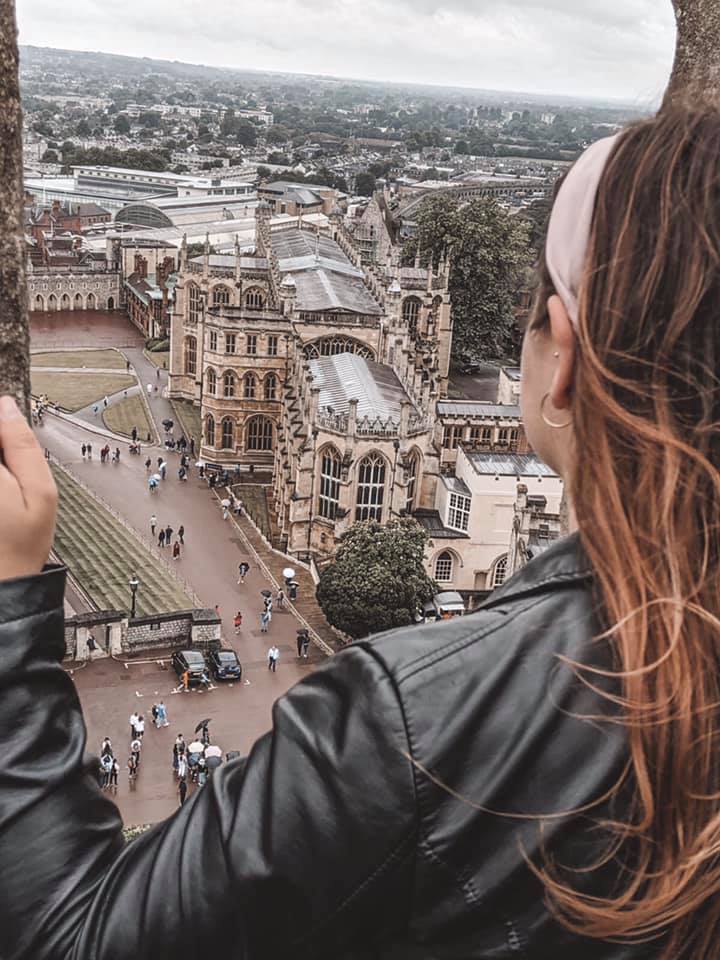 Queen Mary’s Dolls’ House is said to be the largest, most beautiful and most famous dolls’ house in the world. While sadly the Queen Mary’s Dolls House is currently closed due to Future Programme works, you can have a nosy around online here.

While you’re in the area don’t miss:

Located very near to the entrance of Windsor Castle, and on the way to the Long Walk is the unmistakable 400-year-old crooked house. Today, Jersey Pearl has taken up residence with their pick-a-pearl experience, but this 16th-century house is rumoured to have a secret passageway direct to Windsor Castle underneath the building, used by Charles II and Nell Gwynn for secret rendezvous. 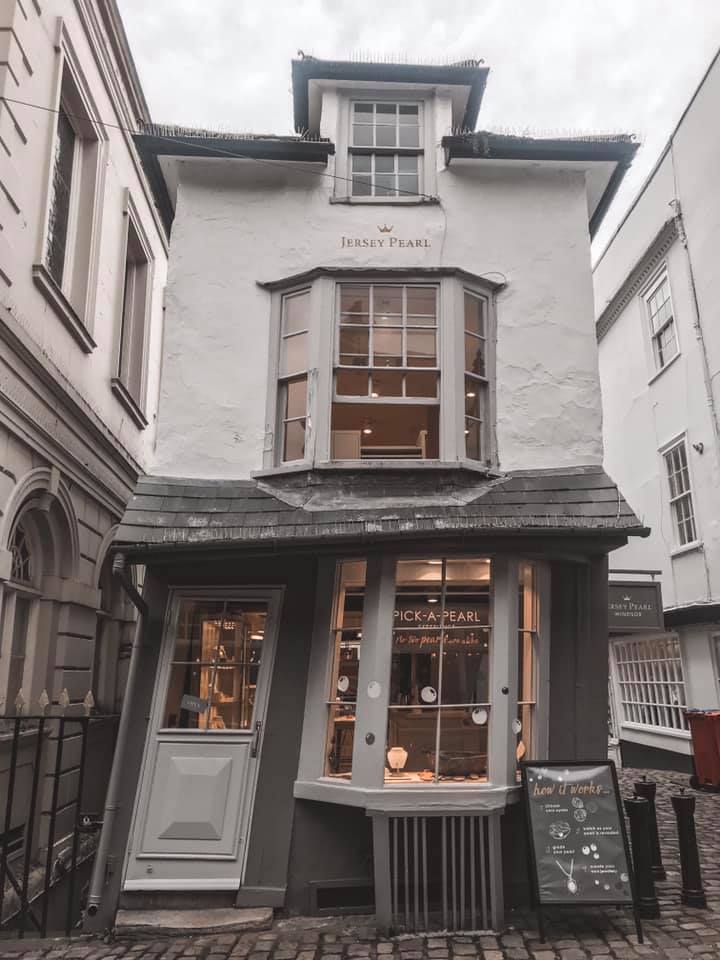 By now you’ll probably have worked up an appetite, but escape the hustle and bustle of the high street and head in the direction of the Long Walk. Here you’ll find a great lunch spot that in 1129AD was known as the Kings Garden.

The Long Walk is 2.6 miles from Windsor Castle to the Copper Horse on Snow Hill, used today as a recessionary route during Ascot, weddings and further events. While not in use, the Long Walk is accessible from Park Street to the hill. 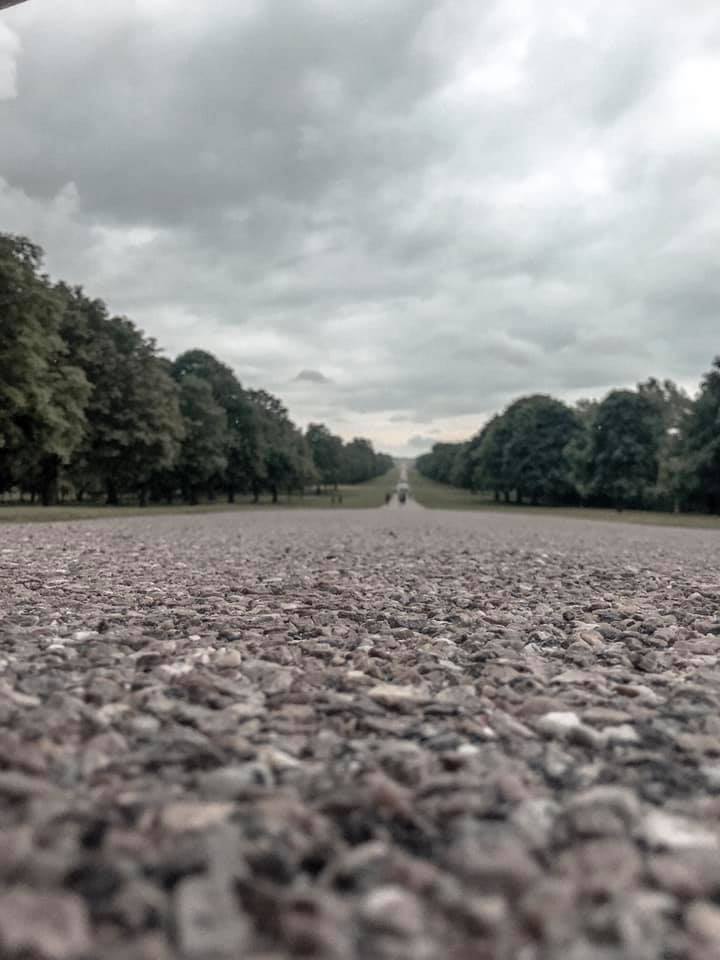 While annoyingly, Eton College only run their heritage tours on Friday afternoons, their museums (Natural History Museum, Museum of Antiquities and Museum of Eton Life) are free to visit on Sundays from 2.30pm to 5pm.

You can also hop on a boat with French Brothers to catch a glimpse of Eton boating yard, the college and other attractions. 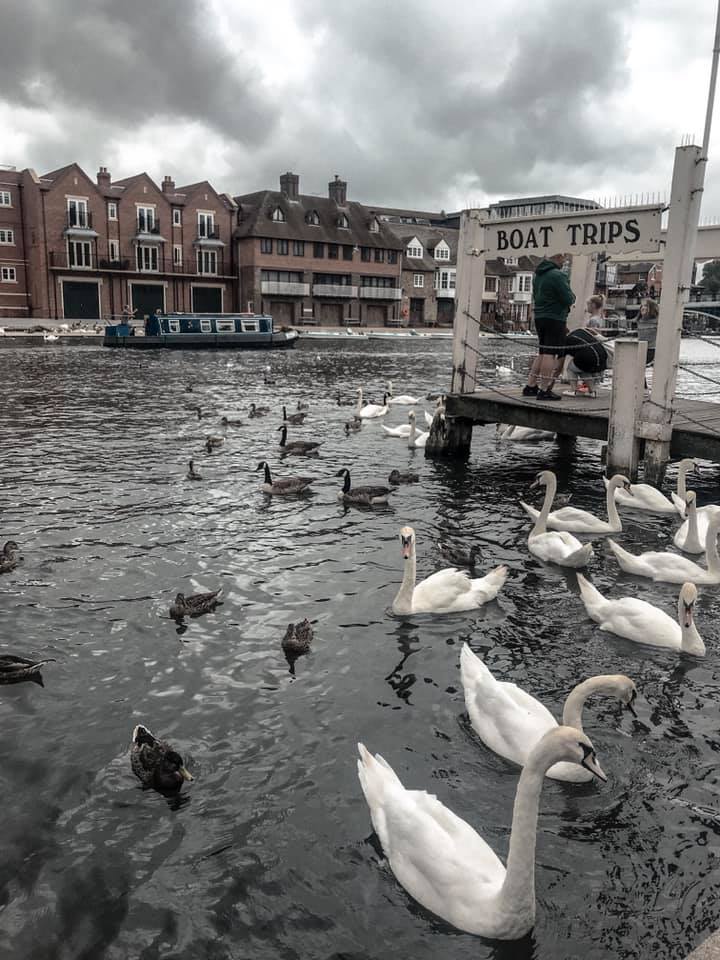 If you’ve got a little longer to spare, then consider the Queen’s Walkway – a self-guided trail. The trail connects 63 of Windsor’s attractions covering 6.373km for the 63 years, 7 months and 3 days of the Queen’s reign. The trail was developed to mark the occasion of The Queen becoming Britain’s longest-reigning monarch. 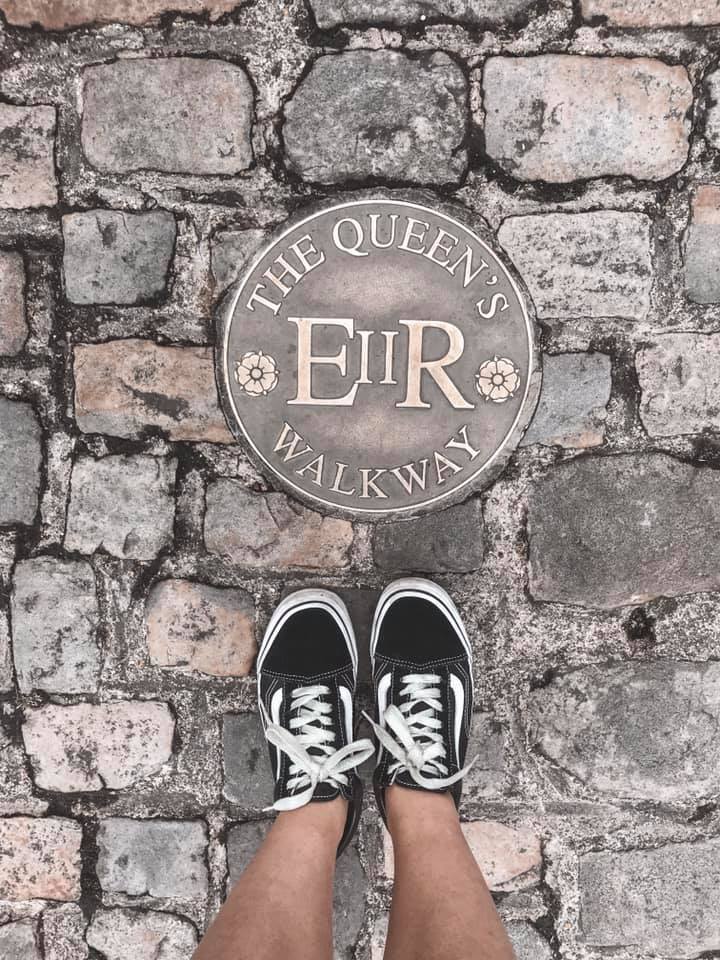 So while you’ll never be royal – as Lorde so graciously remind us – you can be content with marvelling at a working-castle and at least pretend to be a princess for a time.

Things to do in Gloucester …

The Best Things to Do …