The chances are that if you Google search ‘Elephant Sanctuary Chiang Mai’ your search will return endless results. But just because they claim to be ‘ethical’, doesn’t mean they are.

I booked to visit the Elephant Jungle Sanctuary before realising that this was a common problem, and the reviews were mixed. While the majority of reviews were positive, there were one or two that highlighted a concern. I was recommended to go with the reputable Elephant Nature Park, however having already paid a deposit for the booking (lesson learnt), I decided to find out for myself.

The final group to be picked up, we were hoping for a nice air conditioned minibus but our ride was in fact a Songthaew already filled with 5 others – no chance of a nap en!

Despite appearances, it was still comfortable. It took a couple of hours to reach our camp, with a stop off on the way but the time was easily remedied with easy conversation between the others in our group.

We hop off our songthaew into what appears to be a jungle, before we’re led down a path and *gasp* for we can see the elephants roaming free! We’re led over to the main hub for a briefing, where other groups are waiting.

Karen Shirts are handed out in a variety of sizes, these appear be clean but likely worn before (don’t worry, you’ll get a new one when you’re dropped off).

We had a briefing about the elephants, the importance of the work carried out and to remember that – like us – the elephants have names and personalities and they are to be respected – understood! 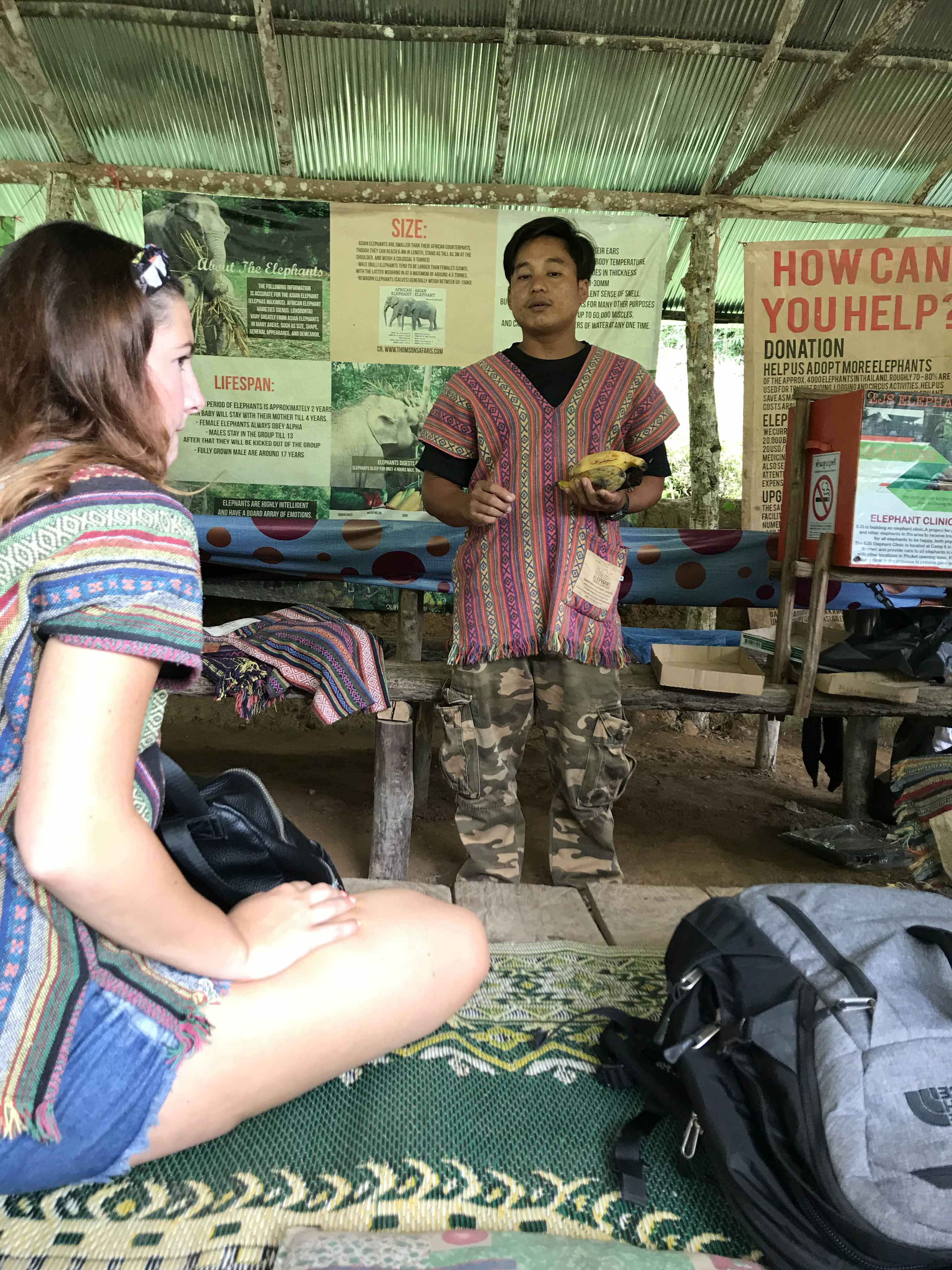 We were given instructions about how to feed the elephants, and not to tease them. Hold the food up high so they can reach it easily with their trunks.

We were asked to wash our hands of any sun creams or mosquito repellents so these wouldn’t affect the elephants, before filling our pockets up with sugar cane and bananas – as much as we could carry because elephants eat ALOT. And yes, I was pretty much out of food in 30 seconds flat.

The elephants were surprisingly gentle, but they didn’t mind a quick rummage around your pockets for any extra food! 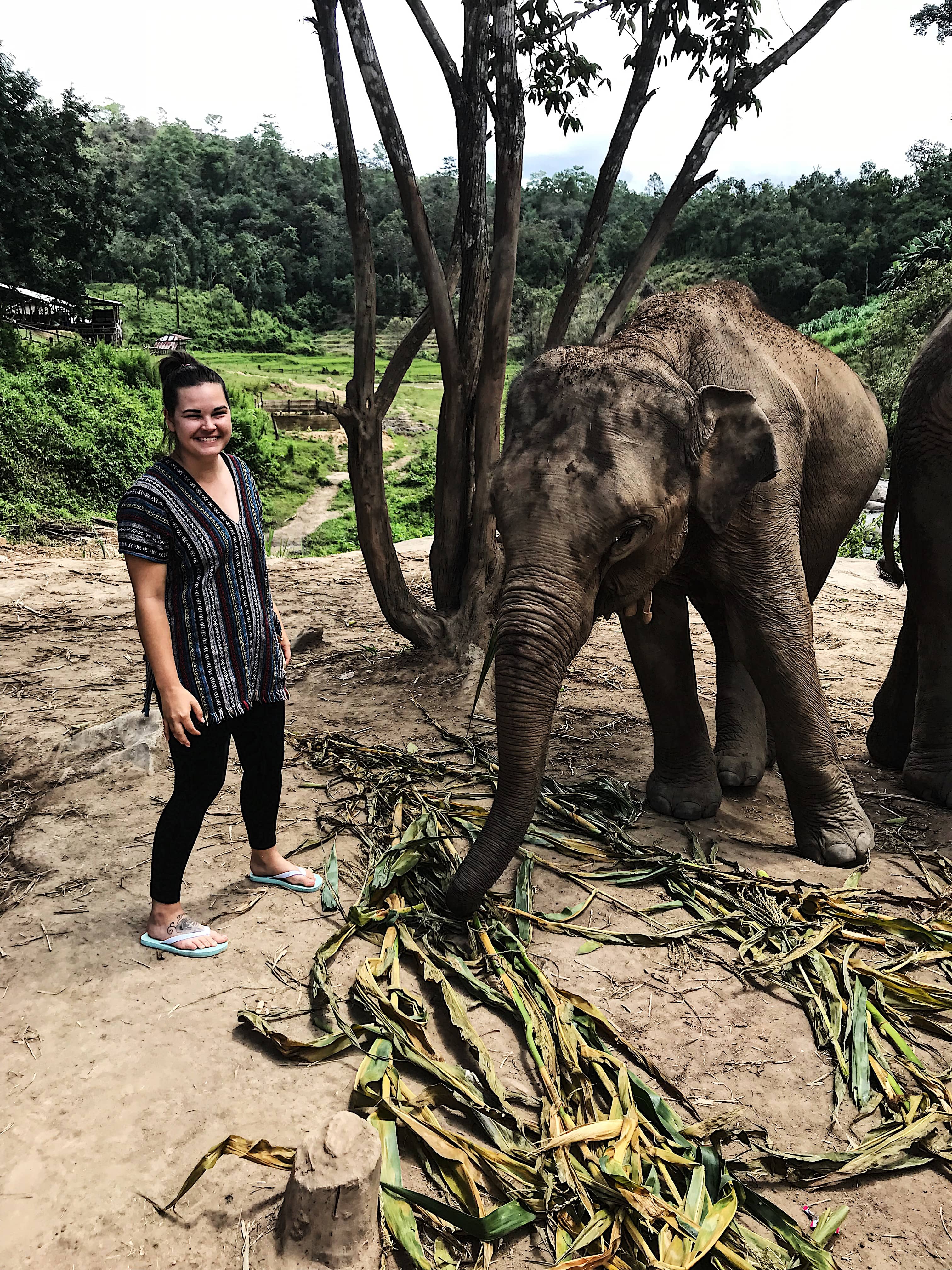 After we had fed the older elephants, we headed over to two more camps that were walking distance – one containing the mischievous baby elephants. 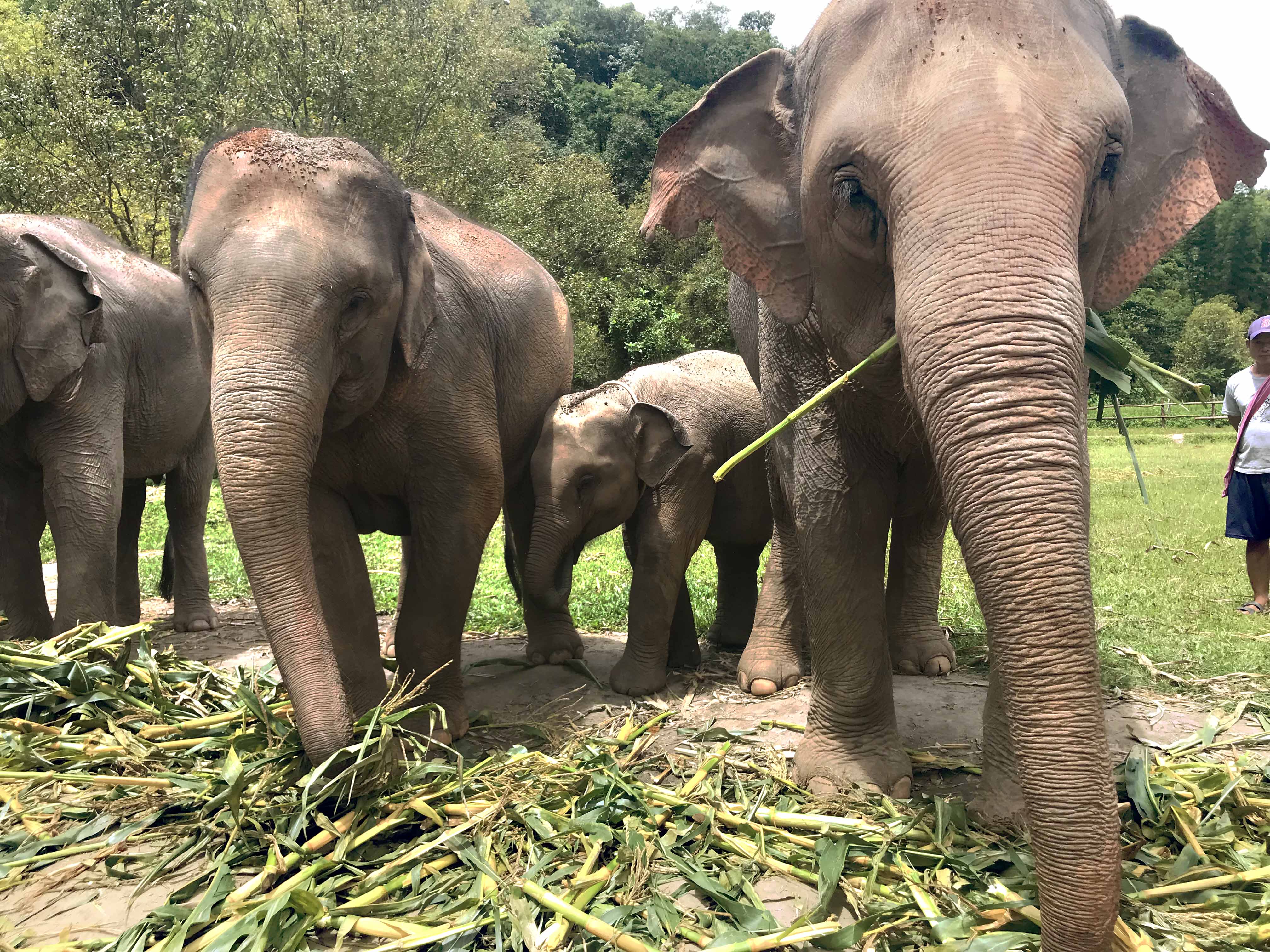 Like all the food I ate in Thailand, lunch was delicious. A simple buffet of chicken fried rice, tofu, vegetables and watermelon was provided, and it was so good and plentiful that some went up for seconds. 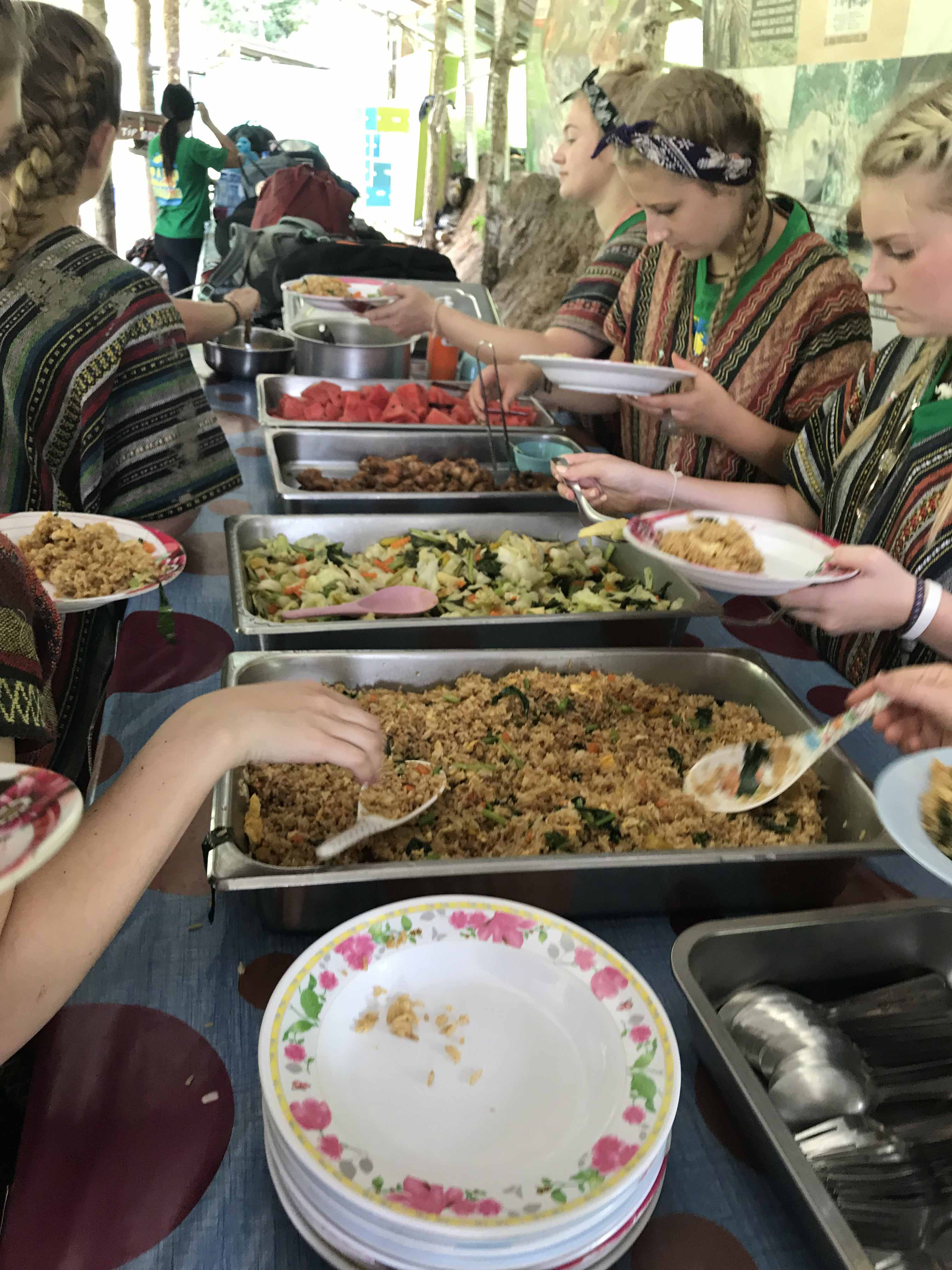 We played our part in preparing the medicine balls from the raw ingredients, smushing them altogether and then rolling them into balls. 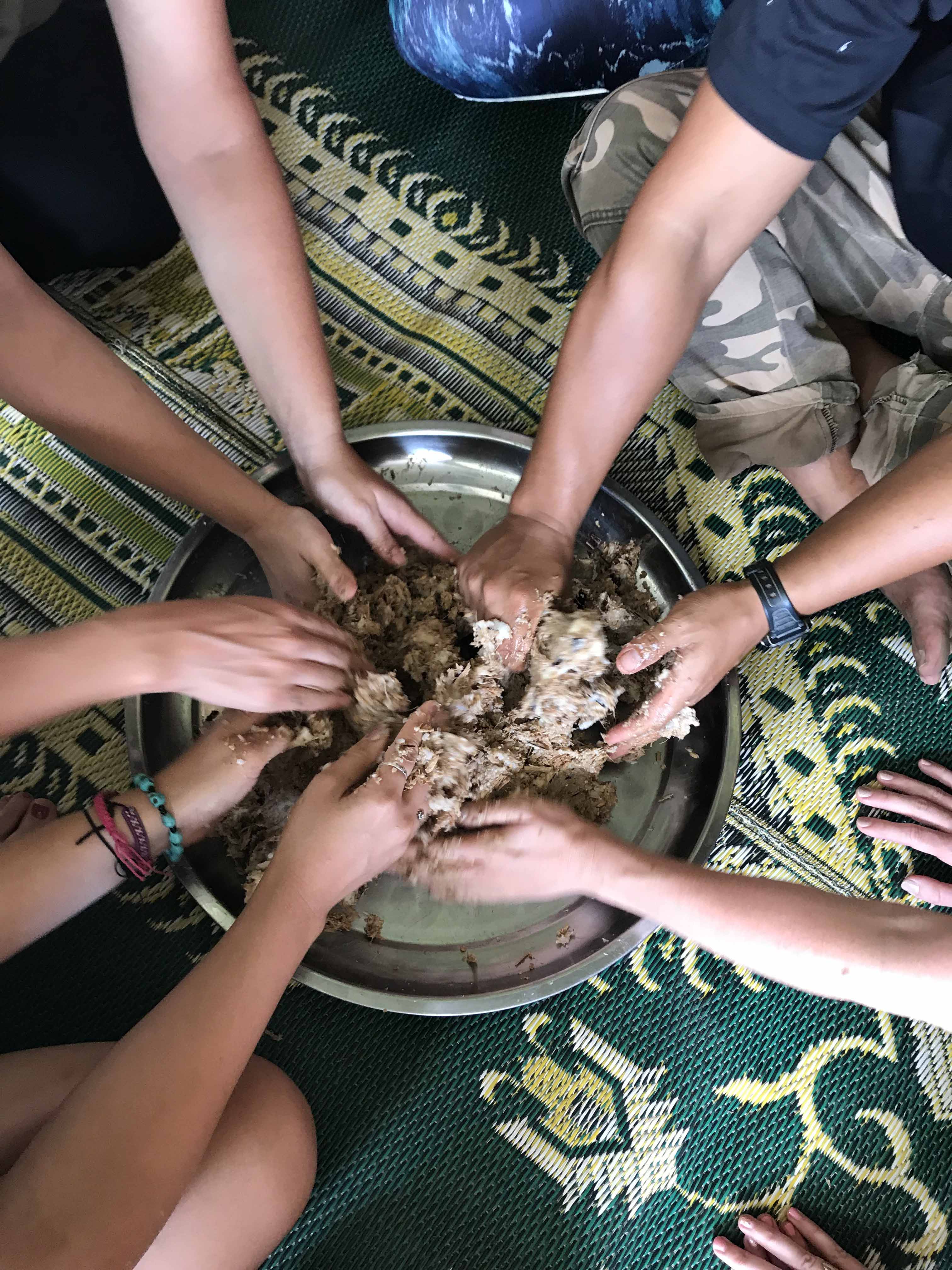 With the medicine balls underway, we changed in to our swimwear and headed down towards the bank.

This time, when feeding the elephants the medicine balls we placed them directly into their mouths – and they were all to keen for some more food!

Then it was time for the mud bath!

We had to take care not to get squashed by the elephants as they roamed around the water and of course – watch your toes! We splashed the elephants (and ourselves) with mud which is good for their skin. 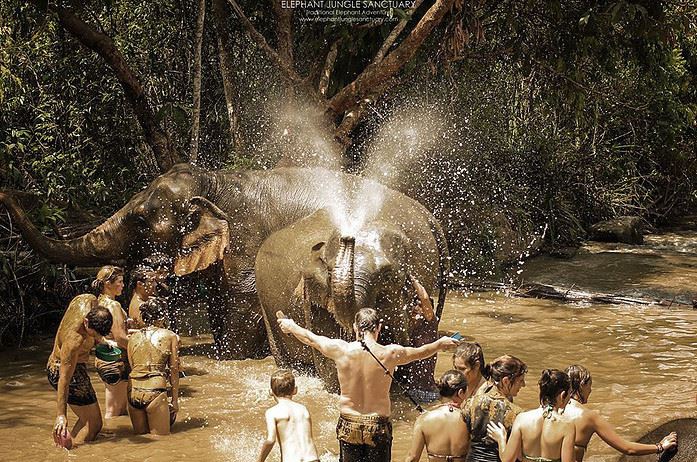 I haven’t yet taken these off my Go Pro, so this image is from Elephant Jungle Sanctuary

After the mud came the clean off, we followed the elephants over to the river and rinsed them and us off.

Once we’d cleaned up after our mud experience, it was time for a quick tea or coffee.

There was an opportunity to buy t-shirts, caps and other things but we were given a Karen shirt as we were dropped off which makes a great souvenir.

A couple of hours drive and we were back at our hotel, hearts full of joy, some new friends along the way and pretty damn tired.

What to wear to the elephant sanctuary Chiang Mai

During the full day tour, we were given a traditional Karen clothing to wear. I chose to wear leggings since it was in rural Thailand and I was hoping to offer some protection from the mosquitos!

Other wore denim shorts and t shirts, so something comfortable that you don’t mind getting a little grubby. 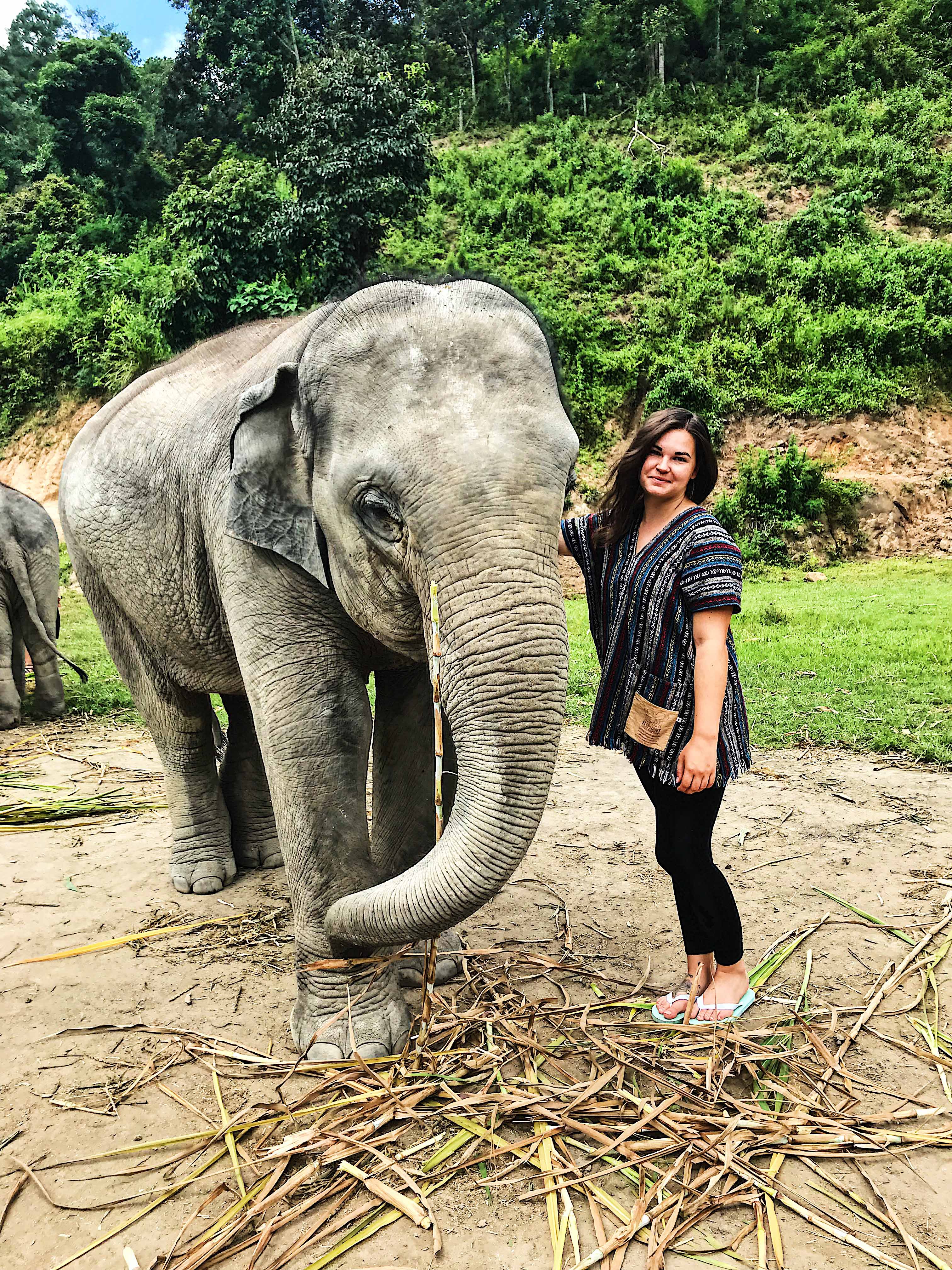 What to bring to the elephant sanctuary Chiang Mai

The usual suspects; sun cream and mosquito repellent but be sure to pack a change of clothes and/or underwear.

Wear clothes and shoes you don’t mind getting dirty. 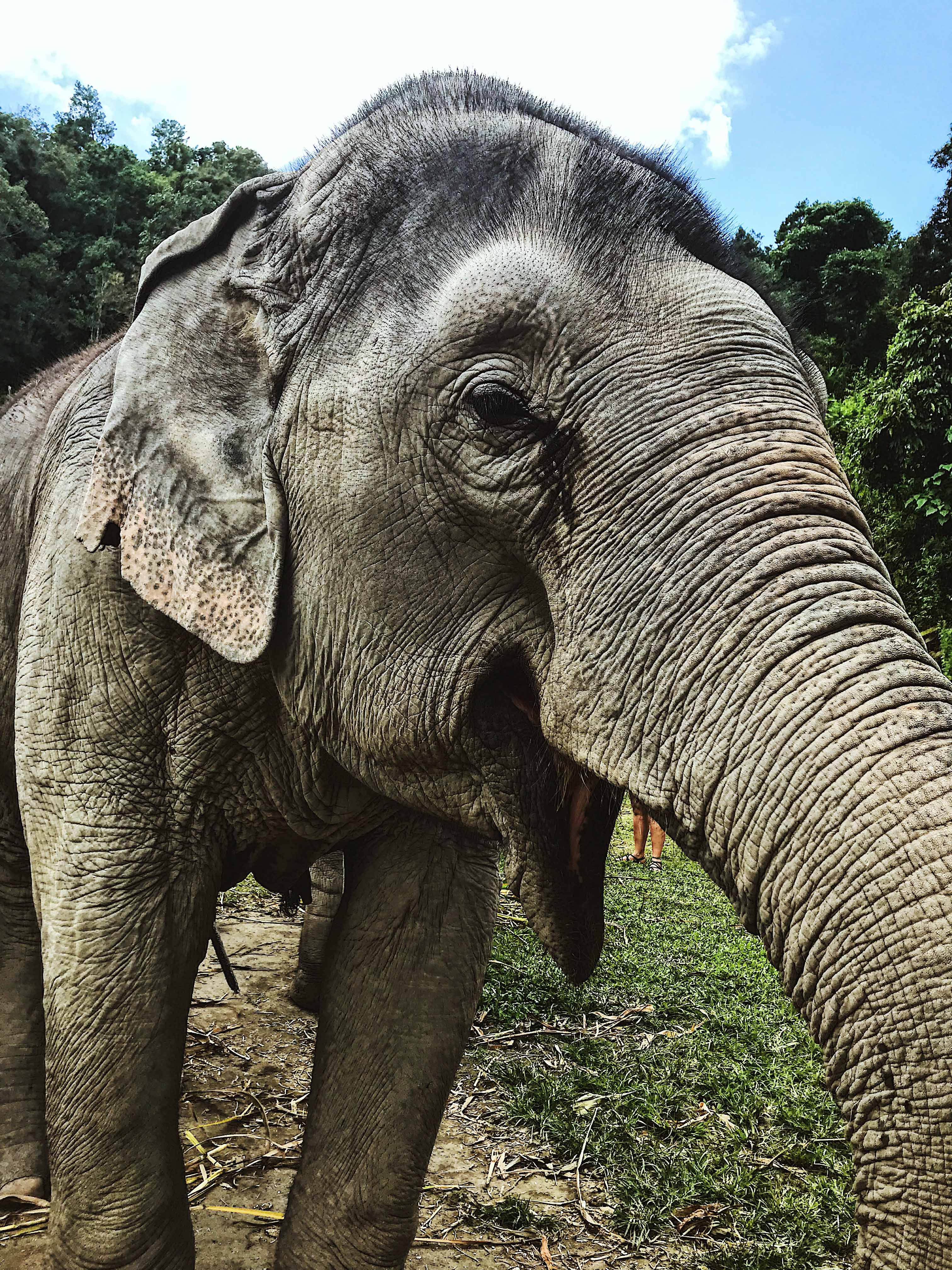 But the question on everyone’s lips is,

From my experience in Camp 1, yes it was. It was clear how much affection the local villagers had for the elephants, and the elephants were free to roam with a clear explanation in to the respect we should give to these majestic mammals. They were never once beaten or coerced into something they didn’t want to do. That said, there were a number of reviews online that contradicted my experience depending on which camp they were in – but I can only tell you about the experience I had and it was extremely positive.