Usually wearing an item of pink hue, street photographer Colin is as eccentric and engaging as the subjects in his new photo book –  Stokes Croft and Montpelier. So when I was offered the opportunity to join Colin on a behind-the-scenes tour of Bristol’s ‘ghetto’, I jumped at the chance to explore this misunderstood cultural hub.

I was honoured to have joined street photographer Colin Moody on a tour of Stoke’s Croft where I received a complimentary copy of his new book – Stokes Croft and Montpelier. This article comes as an extension of the tour and the book, but all opinions expressed are my own, and no monetary compensation was received in exchange for my views.

While the street art that adorns every crevice in the area is a sight in itself, after speaking to Colin who befriended his subjects to gain authenticity in his photography, it’s clear to see that it’s the people that make the place a home.

Sure Bristol can boast about Cary Grant and JK Rowling as its great over achievers, but it’s the overlooked and rugged everyday individuals that caught Colin’s attention. Many of these have been featured on the Absolute Bristol Legends tea towel that seeks to raise money for local charity – Caring in Bristol.

The following individuals achieve greatness from the mundane, and can still be found on the corners of Stoke’s Croft. So if you happen to see them around, why not buy them a coffee for their honorary efforts in keeping the spirit of Stoke’s Croft alive.

Around the millennium, Jeff fled violence in Jamaica and wound up in Bristol, eventually coming to sell the Big Issue. While homelessness doesn’t usually scream inspiration, Jeff has become a local legend thanks to his unwavering positivity. Those that meet Jeff in the street are rewarded with a fist bump, a hug or a simple chat. In January 2019, Jeff’s unbounded enthusiasm earned him a permanent home after 500 people in Bristol donated to buy him a Volkswagen van.

Colin said, “If we had a few more Jeff Knights there is nothing we could not achieve. I for one am glad he recently got a van from people who all chipped in online to help him off the streets. He is the king of Bristol. That’s how I wanted to shoot him. He stands leg propped partly to the side and shows us his copy of the big issue. Kings were painted centre, with their riches and their kingdom all around them. Jeff has the ripped posters, rusty rails and tagged walls in this kingdom but he seems so much more alive than Henry VIII in his portrait. He gets so much pleasure connecting to people passing by, he must fist bump half the city each year. Long May he reign.” 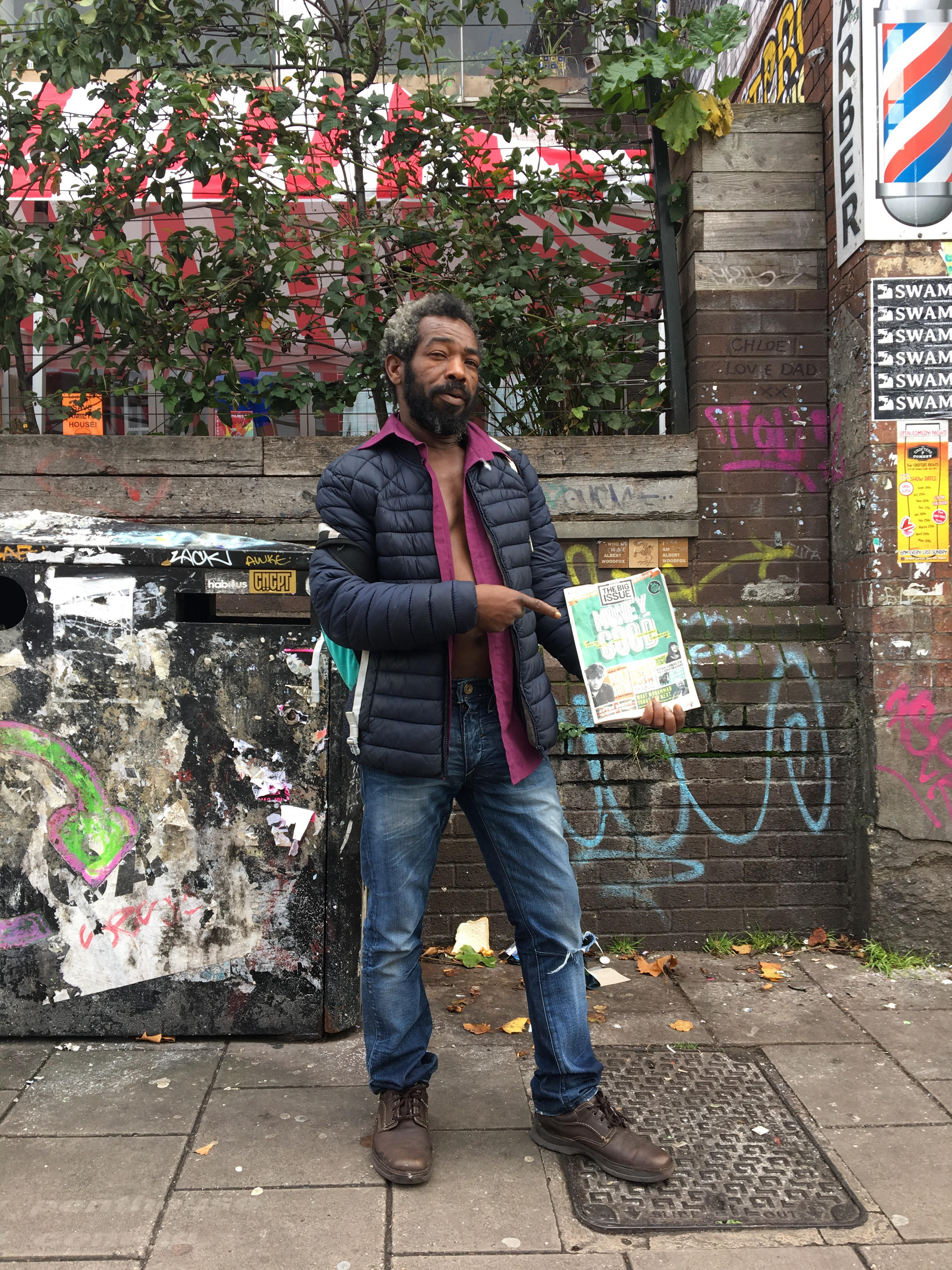 Jeff Knight, as photographed by Colin Moody in the book Stokes Croft and Montpelier

Founder of the People’s Republic of Stokes Croft, Chris is a strong believer in Political expression, going so far as to provide a safe space and materials for aspiring artists. But Chris isn’t afraid to get his hands dirty, even accepting his arrest over his own political expression when he painted the ‘Welcome to Stokes Croft’ sign in 2009 to which he pleaded; “I could not plead guilty to this charge, because it is my honest belief that the act was a positive one, seeking to improve the area, thereby benefiting everybody in Stokes Croft.”

The People’s Republic of Stoke’s Croft seeks to’promote and bring to fruition the notion of Stokes Croft as a Cultural Quarter, as a destination. Its seeks to promote creativity and activity in the local environment, thereby generating prosperity, both financial and spiritual. PRSC will work in all ways to enhance the reputation of Stokes Croft as a globally renowned Centre for Excellence in the Arts, both in its actions and by encouraging the action of others.” Who do you know who’s fighting this hard for the good of the community?

Th community work by PRSC is financed by Stokes Croft China – a local studio and factory that decorates fine English bone china using salvaged ceramic transfers from a bygone era – and my goodness some of their designs are just beautiful. You’ll find the store front adjoining the PRSC HQ in Stokes Croft.

Colin says, “Chris didn’t make it into the book. But he is just off camera here and there. He helped me find out a lot more about the homeless, the street art and the various communities that flow through this space. He is represented in the book with the Fuck Austerity mugs. He genuinely wants the area to be able to be a space that does not become uniform and samey. One that can be used by the many and never end up just for the few. That’s refreshing and a good place to start a journey to meet some very interesting people that you will see in the book. I’m sharing with you the shot of the two bin men. I let them talk to Chris off camera to get that wonderful connection. Just look as the guy on the right. And did you know Chris gave these two copies of the book this Christmas as a thank you. Top bloke.” 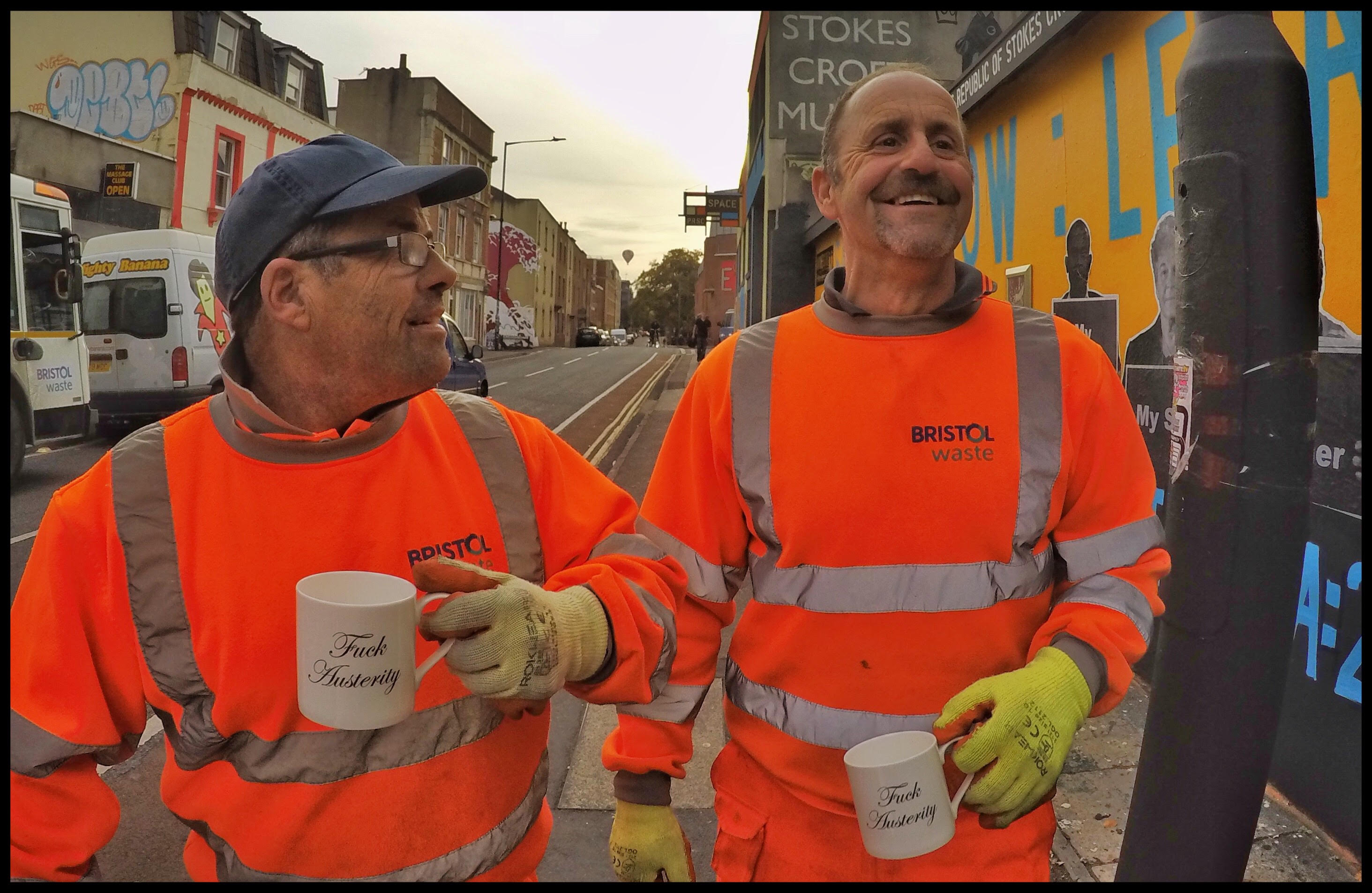 To look at Derek Serpell-Morris, you’d have assumed he wiled away his Sunday afternoons with a cup of tea and a crossword, planted in his favourite chair with his Moccasin slippers. And while the cardigans and bright waistcoats may paint the picture as an ordinary man, DJ Derek – as he’s come to be known – was anything but. Dubbed the ‘blackest white man in Bristol’, this former-accountant for Fry’s Chocolates found his true calling after quitting his job and moving in to a small basement flat – where he remained the rest of his life. Shortly after, Derek began DJing at a local pub introducing reggae, ska, rocksteady, dancehall and R&B genres and the rest is history.

At age 73, DJ Derek claimed the title of Britain’s oldest DJ, and having played Glastonbury and appeared in a Dizzee Rascal video a very accomplished DJ at that – even touring with Bob Marley’s legendary band the Wailers. Sadly Derek went missing in July 2015, and his remains were later found near Cribbs Causeway that the police deemed not to be suspicious. Hundreds attended Derek’s funeral in celebration of his colourful life, and his memory continues.

“Never met DJ Derek but his legend lives on. It was there at a fundraiser down the road where the great, the good, a mayor, some musical heroes, the bad, and the rest, turned up to bid on art pieces donated by local street artists. That’s what you see in the book and it’s one of those community shots that represents so much more for me than if you asked everyone to line up for a press shot. It’s the audience laughing as the auctioneer cracks jokes as the works go under the hammer. DJ Dereks face is held aloft by the assistant and for a second it looks like he’s raising his hands upwards himself, maybe to reach for another classic reggae album to spin.” Colin Moody 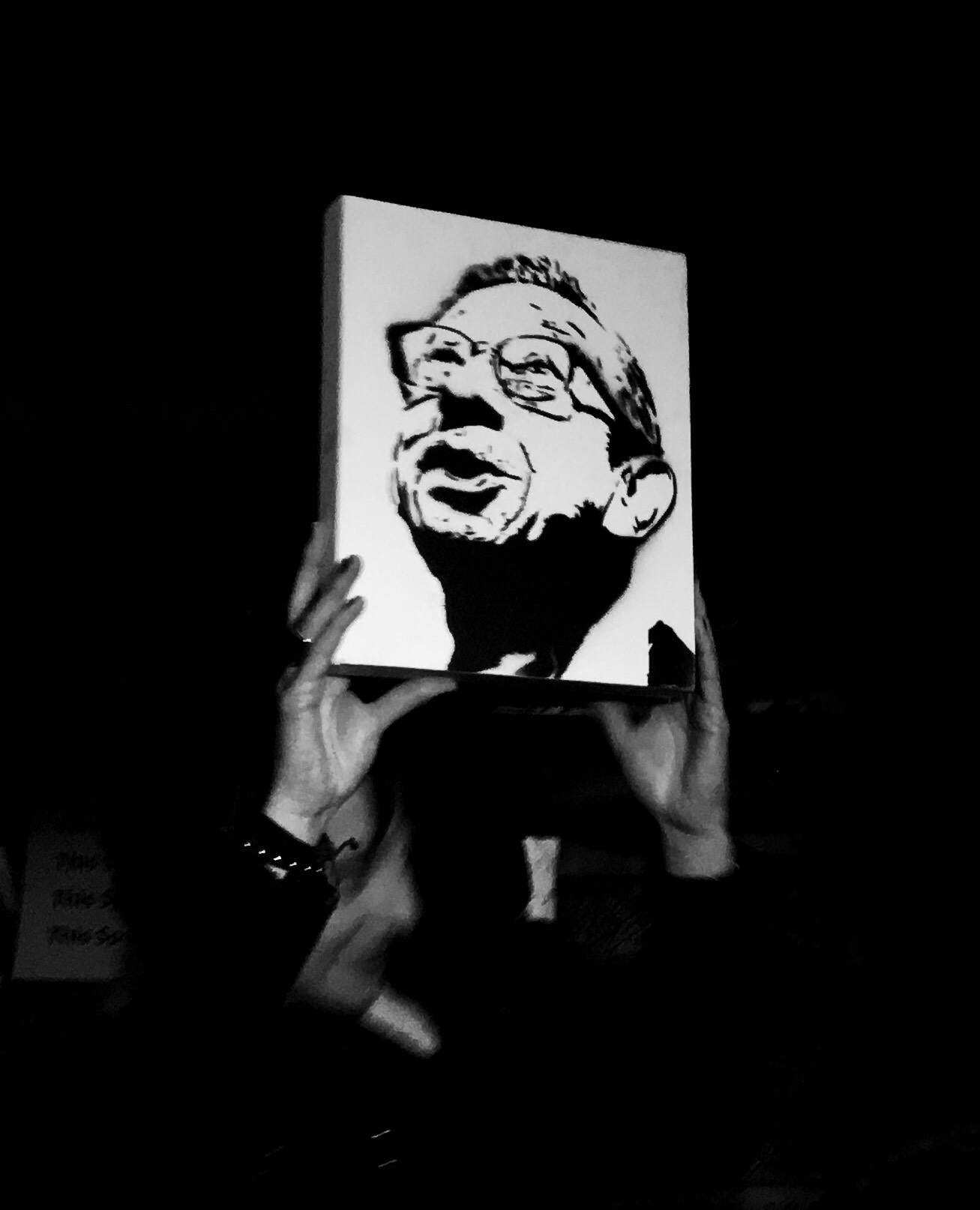 Fundraiser for the late DJ Derek, as photographed by Colin Moody in the book Stokes Croft and Montpelier

Described by Visit Bristol as the ‘Godfather of Bristol urban art’, John Nation directly influenced the work of Banksy and other aspiring artists having provided a platform for their creative expression. As a youth worker in Barton Hill in the mid-1980s, John encouraged the young artists to paint onto the centre’s walls and promoted graffiti. At just 21 years old, John led the ‘Barton Hill Aerosol Art Project’ that sought to provide a safe place to spray-paint without fear of arrest and prosecution.

Ironically, despite gaining permission to lead the project, this led to his arrest for ‘conspiracy to incite criminal vandalism’ but this didn’t deter John from continuing the ‘aerosol art’. Thirty years on and today John leads an award-winning street art walking tour – Where the Wall.

Colin Said, “To get a shot of John Nation in a kind of mirror pose of the artwork by Banksy behind him felt right to go in the book. He was on a Where The Wall tour [Bristol Street Art Tour] and it staggers me to think of how much cultural legacy John has given the city, for his support on the second wave of graffiti artists that swept into the city of Bristol back in the day. Let’s hope some of the visitors watching from the side lines are inspired to make their mark one day. In this photo John and the Banksy are both now image, both art, both in circulation in the book. Nice to tie them together.” 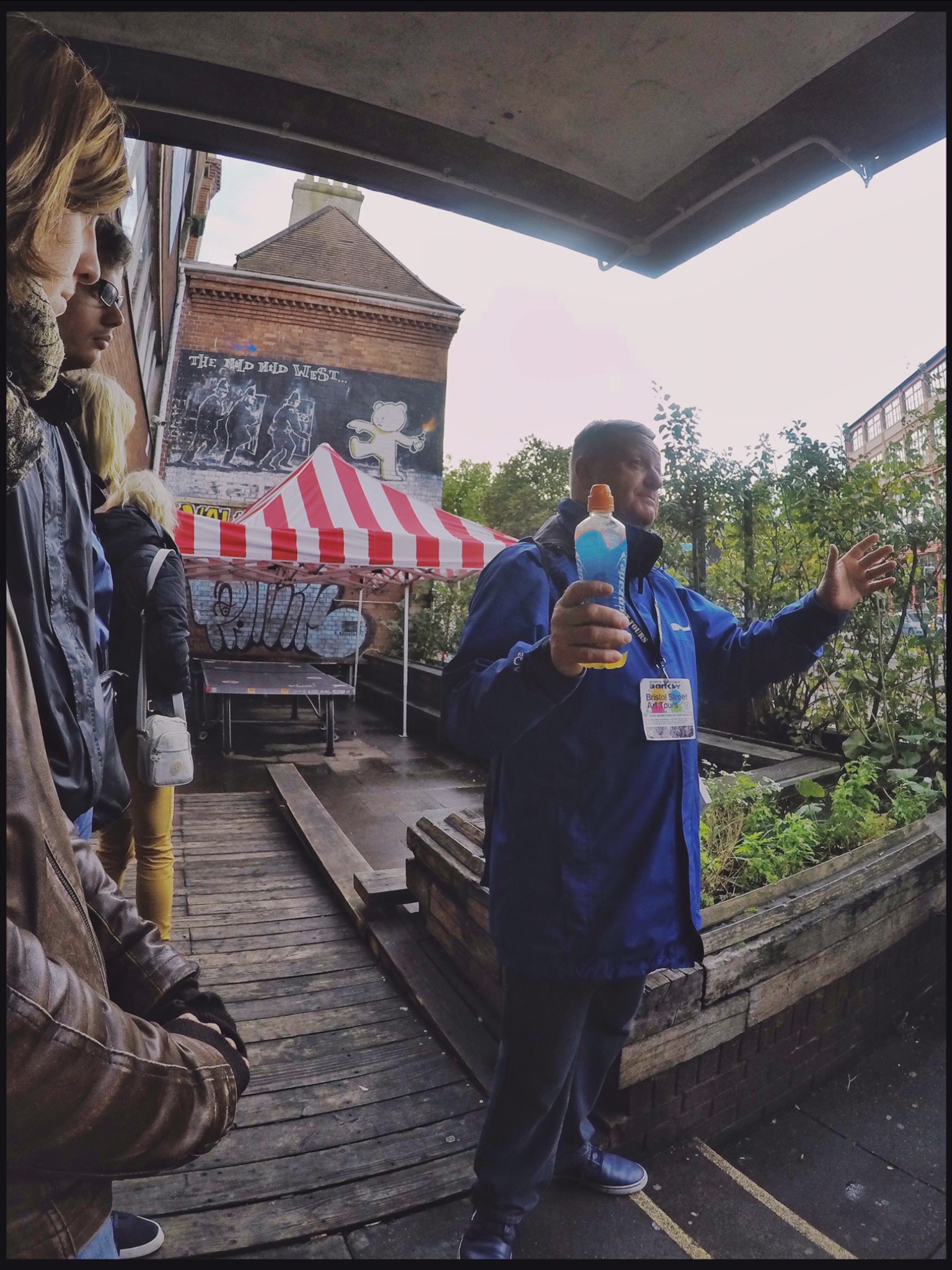 John Nation, as photographed by Colin Moody in the book Stokes Croft and Montpelier

Author: Photojournalist Colin Moody worked as an art department assistant and graphic designer before focusing on photography. Since moving to Bristol nine years ago he has been photographing the city and its people. Extract from Colin’s interview with Bristol 24/7, available in full here.

Publisher: The History Press is the UK’s largest dedicated history publisher. They publish across a broad range of topics and periods, covering the exceptional people, places and events that have shaped our lives today.

Synopsis: No place sums up the Bristol attitude of artistic creation and rebellion as Stokes Croft and Montpelier. With its world-renowned street art, thriving local scene and diverse cultural history, Stokes Croft has for decades been resisting the inevitable creep of corporate interests, but more importantly offers up an alternative. Colin’s photographs take you under the skin of the people, cultures, and place in this unique area of the city, where lives intersect and a new world is being created every day.

Stokes Croft and Montpelier is available to buy online from Waterstones and Amazon,

Everything You Need to Know …